How to prevent gastric ulcers in pigs?

The prevalence of gastric ulcers in pigs is a subject that has been getting a lot of attention in recent years. It is classified as severe inflammation, lesions or actual ulceration of the upper, inner part (par oesophagus) of the pig’s stomach. Unlike the rest of the pig stomach, this area is unprotected by a mucus coating and is therefore less able to withstand acidic conditions. This leads to the formation of stomach lesions and potential ulcers. Not only do stomach problems reduce production, it also impairs health and welfare of pigs.

A review in Denmark showed that 60 – 80% of all pigs monitored scored signs of gastric lesions, hyperkeratosis, ulceration or scarring, indicating previous lesions (Canibe et al., 2016). This is further supported by the research of Friendship (2004). This publication indicates that the incidence of stomach lesions and ulcers might be as high as 80%.

Evidence is available, indicating that the prevalence of gastric problems is even higher in sows. The previously mentioned study by Canibe and co-workers (2016), carried out by Aarhus University in Denmark, reviewed that between 15 – 79% of sows have gastric ulcers and/or scars. It is concluded that sows show a higher ulceration prevalence than finisher pigs.

Possible gastric ulcers issues are likely to be increased in times of stress and periods of low feed intake. Stomach ulcers may lead to increased stress, reduced feed intake and possibly reduced pig performance and longevity in the sow herd. 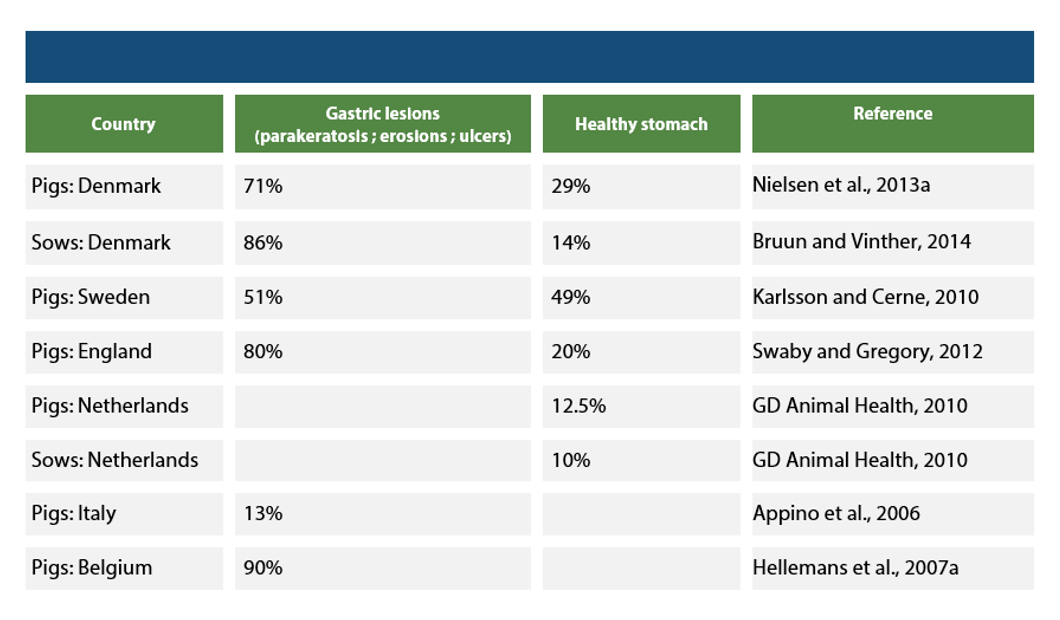 Causes and symptoms of gastric ulcers

The exact cause of gastric ulcers in pigs is not fully understood. However, it has been associated with particle size and pelleting of diets, feed availability, or other events leading to high stress levels within a herd (MSD Vet Manual 2014). There is a general belief that the increase in gastric ulcers during the 1950s was associated with intensification of pig production. For example improved leaner genetic lines, greater stocking densities, fine grinding and pelleting of feed. The continued intensification during the last decades is thought to have resulted in a further increase in the occurrence and prevalence of gastric problems.

Symptoms of stomach ulceration problematics in pigs include restless behaviour, loss of body condition, poor or variable appetites, black and tarry faeces and anaemia. In extreme cases, haemorrhaging or sudden deaths may occur, especially in pigs of 50 – 60 kg live weight. Of course, this results in significant economic losses for farmers and impaired welfare and health for the animals. There is little doubt that gastric lesions or ulcerations cause discomfort or pain in pigs, but it remains unclear from what severity the pigs will start showing symptoms of this discomfort. Hence, it can be questioned whether pain and agitation caused by gastric problems can trigger and be associated with behavioural problems such as tail, flank, or ear biting.

It is well recognized that feeding coarsely ground meal or higher fibre diets can reduce the incidence of ulcerations. This is most likely a result of less fluid in the stomach and firmer digesta and a reduced gastric emptying rate. Hence, this results in the fibre creating an actual barrier for stomach acid encountering the pars oesophagus region. However, this strategy could result in an impaired feed utilization with a consequent lower animal productivity and increased environmental load (Millet et al., 2012). That makes this strategy unpopular in modern intensive pig farming. Strategies which help reduce the incidence of ulceration while still maintaining the most efficient output are the desired solution for modern, high-producing pig farms.

Dietary factors reported to increase the risk of gastric ulcers in pigs:

Management factors reported to increase the risk of gastric ulcers in pigs:

CeltiCal is a 100% natural animal feed ingredient. It meets the nutrient requirements for nutrition in sows, piglets and fattening pigs. The basis is a marine mineral complex with 74 bioavailable minerals.

CeltiCal has proven its efficacy in over twenty swine specific in vivo studies and counting. Research has been carried out in different regions worldwide with fattening pigs, sows and piglets. The results show that CeltiCal consequently increases the number of healthy stomachs and reduces the severity of gastric lesions and inflammation. At the same time CeltiCal enhances growth performance, improves feed conversion ratio, and reduces mortality.

This is also of great importance for high prophylactic sow herds. Piglets weaned per sow and litter weights weaned per sow are at the rise. It is important to reduce the risk for gastric inflammation and lesions in order to increase production, health, welfare and sustainability of these sows.

In 2006, the Dutch research institute Schothorst Feed Research (SFR) found a reduction of gastric ulcers and inflammation with CeltiCal. Besides, they also measured an improved feed conversion ratio in fattening pigs.

In a field trial carried out in Co. Wexford in Ireland, Celtical also increased the amount of healthy stomachs found. After the exerpimental period, CeltiCal was taken out of the diets again. Pigs went back on their previous diets and stomachs of pigs were examined again after a period of time. It showed that the amount of pigs suffering from stomach inflammation and ulcers had increased again and was even higher than before CeltiCal had been used. This shows the clear effectiveness of CeltiCal to support a healthy stomach function, reduce gastric problems and improve animal health and welfare at the same time. For more research data and details, please contact the team.

The video shows that the gastrointestinal tract of a pig is subject to large pH fluctuations. Chiang et al. (2008) published in the Journal of Animal Sciences that there is also a correlation between meal size and pH. Higher feed intake results in an increased pH > 3.5 for a longer time. CeltiCal helps to optimise the pH along the digestive tract. Hence, overall feed utilization is improved. CeltiCal supports digestion and a healthy gut. This will optimise enzyme activity and improves the conversion of micro and macro nutrients of the diet.

Video: pH development in gastrointestinal tract of a pig

The inclusion of CeltiCal in pig diets controls the negative impact of gastric acid in the very upper part of the pig’s stomach. Hence, CeltiCal protects the par oesophagus region from acid erosion and ulceration. The matrix of the bioavailable marine minerals starts reacting and thus soothing any affected area in the upper part of the stomach very rapid after the pig eats. Subsequently, this leads to less buffering material in the rest of the digestive tract. As a result, CeltiCal has a positive contribition to the Acid Binding Capacity (ABC) of a pig diet in the digestive system.

This is also demonstrated by Steenkamp and co-workers (2014) in a trial with pigs starting at 27 kg live weight up to 70 kg and a ten week feeding period. The report confirms that CeltiCal in a pellet and meal diet improved stomach health and reduced gastric ulcers. Also, stomach pH in both diets was reduced when pigs are fed CeltiCal. The pH along the rest of the digestive tract was also more acidic. This should have further benefits for animal gut health and a better balance of microbial populations.

Data confirms that a healthier gut function with CeltiCal improved feed conversion ratio (FCR). For the pellet diet FCR reduced by 0.10 pts to 2.42 with CeltiCal. And also the meal diet improved FCR by 0.13 pts to 2.65 with CeltiCal. 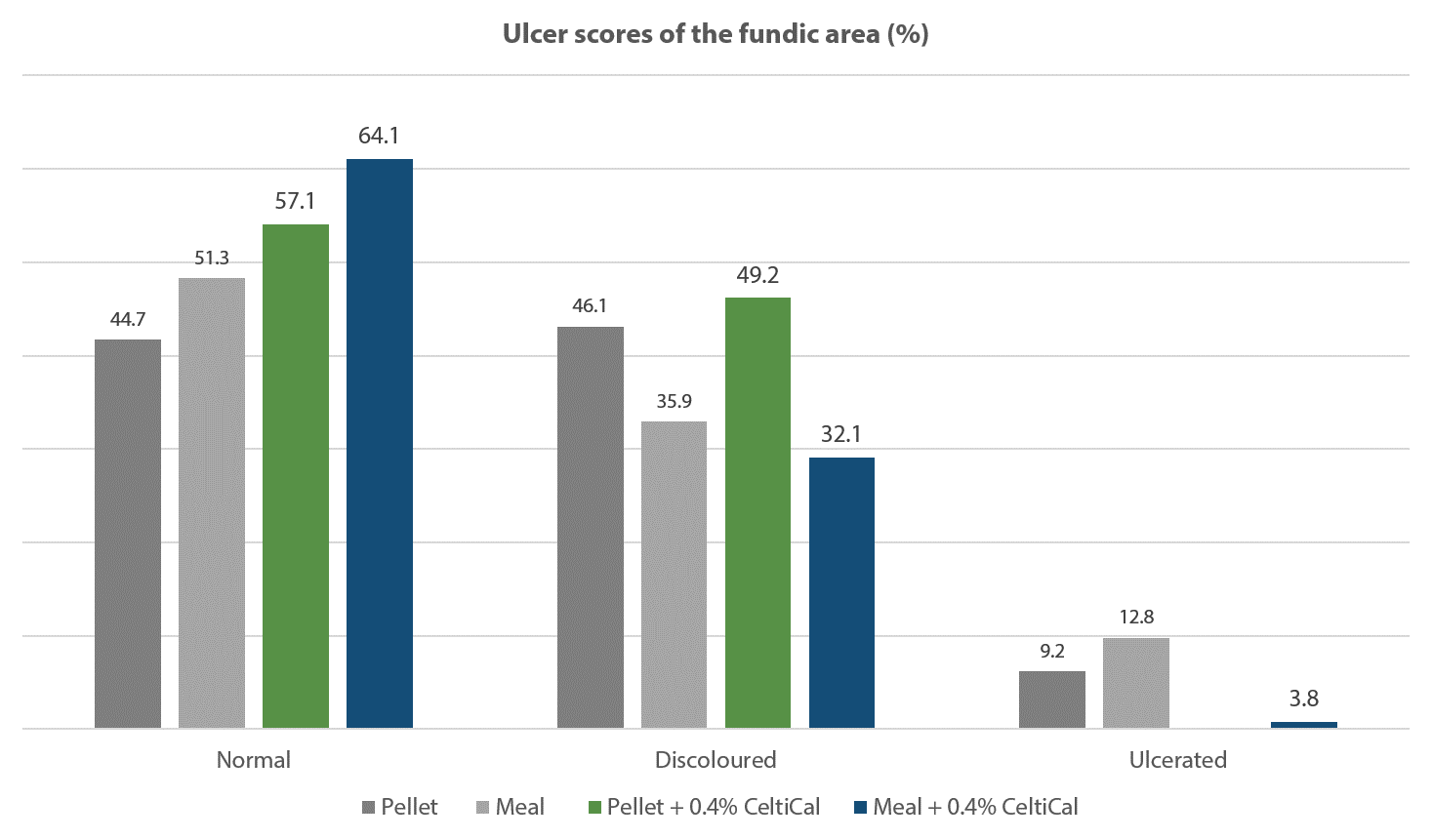 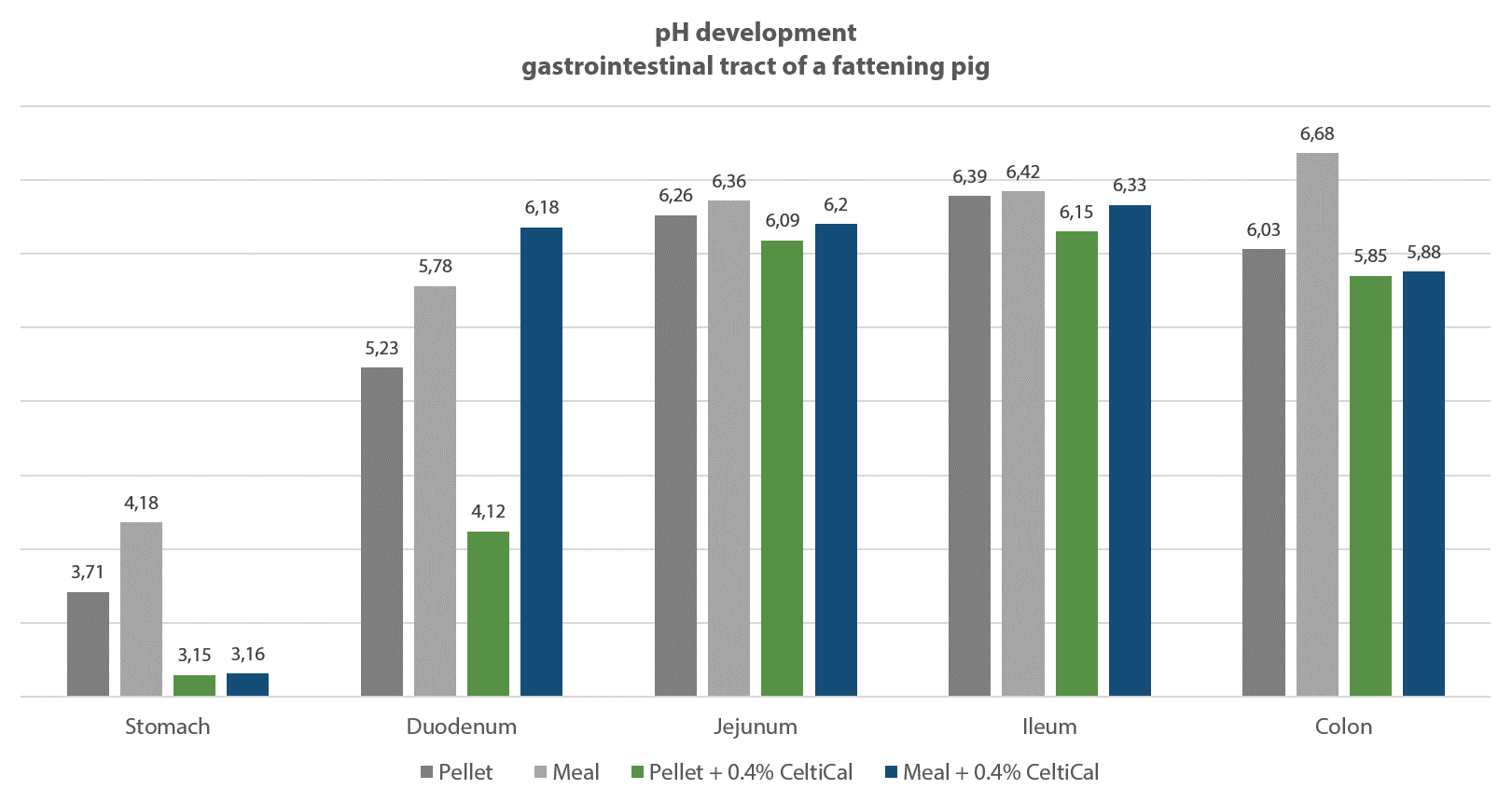 In summary, it could be concluded that gastric ulcers are a significant challenge in pig herds, which must be managed to sustain Performance Excellence and animal welfare. Over twenty research papers specific for our marine minerals and pig application have demonstrated the very clear potential in reducing the occurrence and severity of stomach lesions and gastric ulcers. A healthy stomach function leads to Gut Excellence.

In return, pig producers and hog farmers get an easy to manage high performing herd with relaxed animals. CeltiCal enables to optimise feed conversion ratio and support animal welfare at the same time.

The report of Steenkamp (2014) is published by Stellenbosch University Library. Download the full report here and get powered by our science. 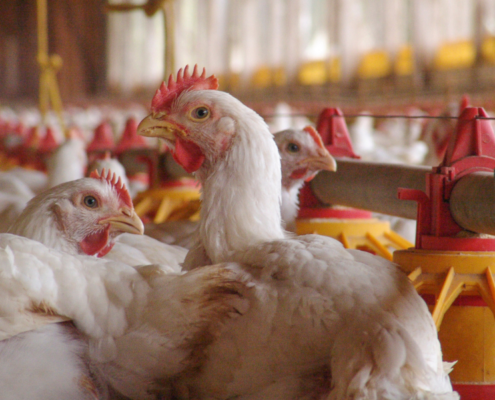 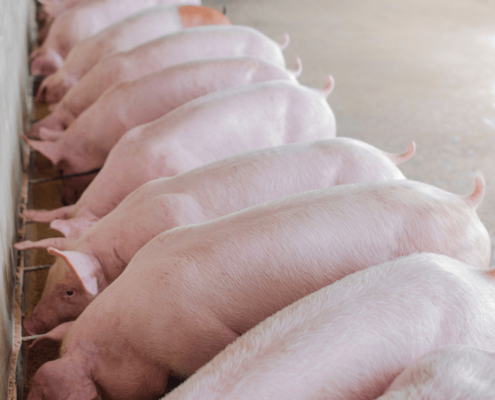 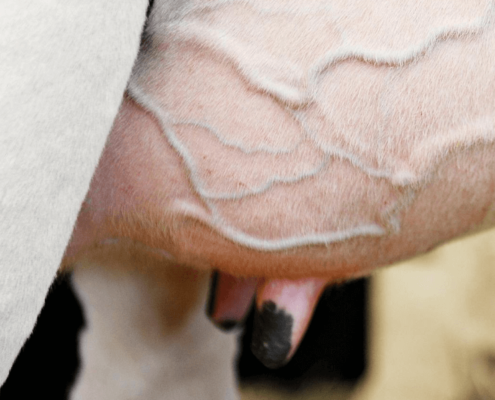 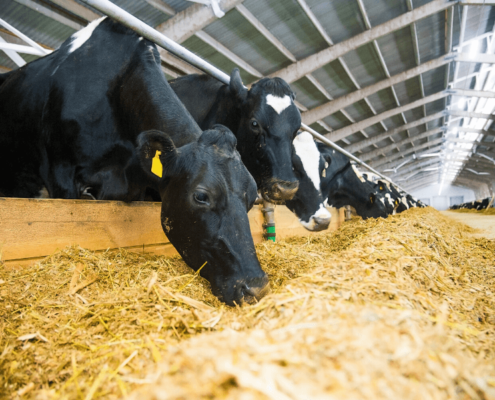 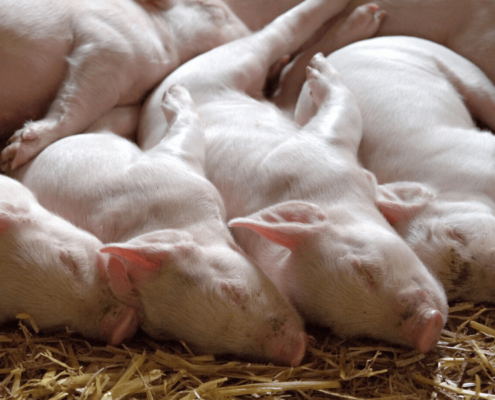 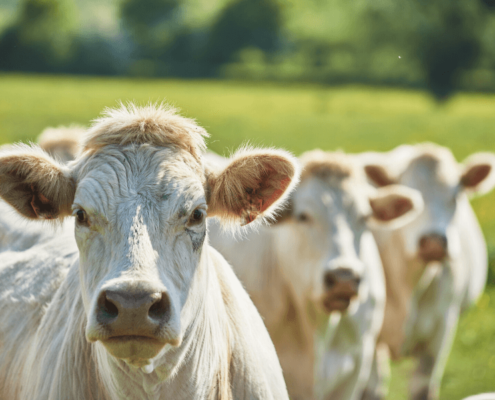 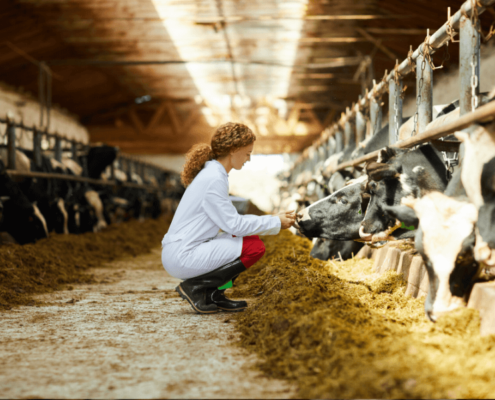 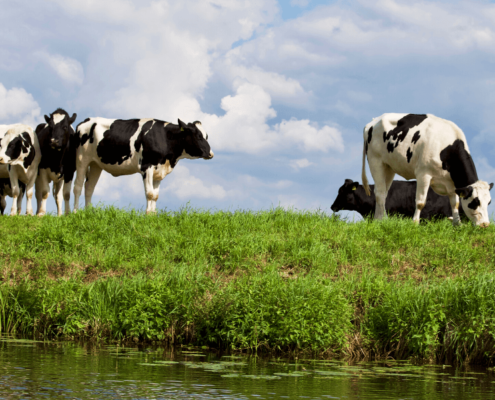 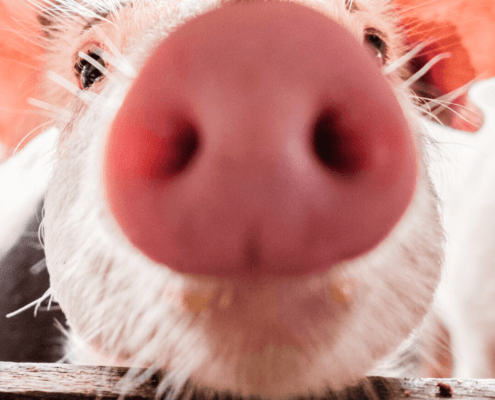 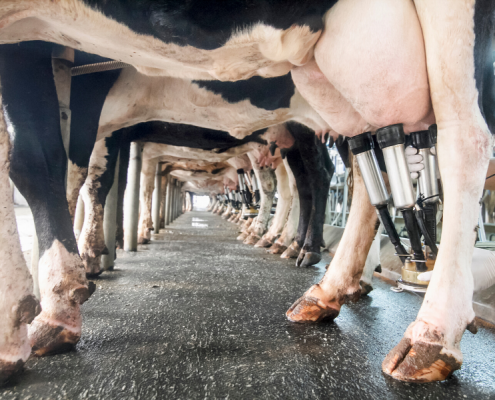 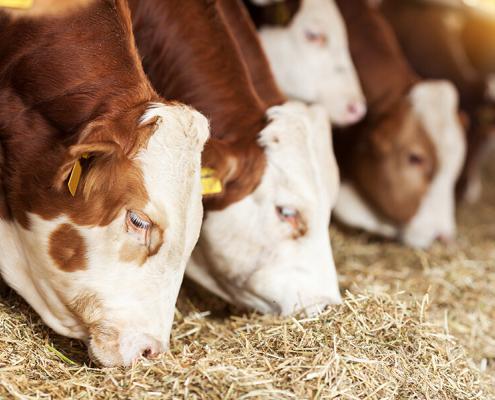 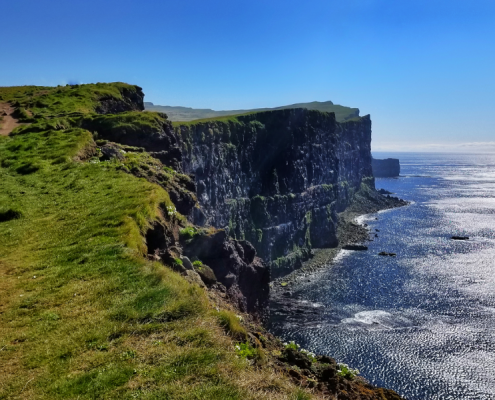 You want to get powered by our science?

We use cookies to help you to get powered by our science. By browsing the site you agree to a tailored web experience.

We may request cookies to be set on your device. We use cookies to let us know when you visit our websites, how you interact with us, to enrich your user experience, and to customize your relationship with our website.

Click on the different category headings to find out more. You can also change some of your preferences. Note that blocking some types of cookies may impact your experience on our websites and the services we are able to offer.

These cookies are strictly necessary to provide you with services available through our website and to use some of its features.

Because these cookies are strictly necessary to deliver the website, refuseing them will have impact how our site functions. You always can block or delete cookies by changing your browser settings and force blocking all cookies on this website. But this will always prompt you to accept/refuse cookies when revisiting our site.

We fully respect if you want to refuse cookies but to avoid asking you again and again kindly allow us to store a cookie for that. You are free to opt out any time or opt in for other cookies to get a better experience. If you refuse cookies we will remove all set cookies in our domain.

We provide you with a list of stored cookies on your computer in our domain so you can check what we stored. Due to security reasons we are not able to show or modify cookies from other domains. You can check these in your browser security settings.

These cookies collect information that is used either in aggregate form to help us understand how our website is being used or how effective our marketing campaigns are, or to help us customize our website and application for you in order to enhance your experience.

If you do not want that we track your visist to our site you can disable tracking in your browser here:

We also use different external services like Google Webfonts, Google Maps, and external Video providers. Since these providers may collect personal data like your IP address we allow you to block them here. Please be aware that this might heavily reduce the functionality and appearance of our site. Changes will take effect once you reload the page.

Please wait while you are redirected to the right page...